The divestment campaign goes after the corporations that maintain, perpetuate, lobby for, and profit from fossil fuels as a component of the nation’s energy picture, a significant difference from tactics aiming at individual behavior—turn off your lights, unplug unused appliances, etc 12 councils in Western Australia, representing over half a billion dollars are already under divestment motions in local government areas covering about 30% of WA residents and ratepayers. To be part of the bigger picture and to get involved in the divestment movement signup here or put your bank on notice over coal and gas.

Tell your Health Fund to divest:https://www.marketforces.org.au/insurance/health

If you are interested in your local government divesting by moving away from high carbon investments, while supporting environmental and economic alternatives please let us know your thoughts.

Is your bank funding the dirty coal and gas industry? 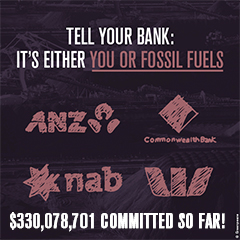 Which banks are not investing in fossil fuels? Which is a better bank to switch to?

Our partners Market Forces have created many resources to help you find and switch to a bank that won’t use your money to fund the fossil fuel industry. More importantly, they help you get the most out of your bank switch, sending a strong message that will encourage your old bank to stop investing in coal and gas while telling your new bank why you joined them.

They have created a table which allows you to compare the position of many banks, credit unions or building societies on investing in the fossil fuels industry.

Banks, credit unions and building societies have been sorted into categories. You can see which banks have funded fossil fuels, which have clarified their position, and which are yet to give a response. Importantly, you can take action and contact your financial institution.

Visit Market Forces resources page for further information including this How to Switch Banks and Make it Count guide.

Whilst we cannot provide financial advice we have assisted hundreds of West Australians to switch their bank or superannuation. If you want to talk to one of our volunteers passionate about this campaign contact perth@350.org.au